The Rumpus and Critical Mass: Jonathan Lethem’s "The Ecstasy of Influence" 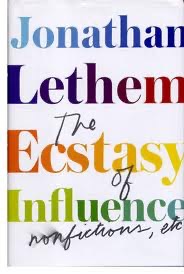 Each day leading up to the March 8 announcement of the 2011 NBCC award winners, Critical Mass is highlighting our thirty finalists. In a first, the NBCC is partnering with other websites to promote our finalists as well in the categories of Criticism and Poetry. Our Criticism finalists will appear on The Rumpus, our Poetry finalists will appear March 7 at O, the Oprah Magazine website. Here is #24 in our series, NBCC board member John Reed on Criticism finalist Jonathan Lethem's "The Ecstasy of Influence," at The Rumpus.

In "The Ecstasy of Influence," Jonathan Lethem skips through culture—fine arts to music to literature to the personal and collective context of it all.  Lethem carries his enthusiasm with elegant but disobedient prose—plenty of adverbs and metaphors—and the self-awareness of an author who is "firmly in the doubting-nonfiction-is-exactly-possible camp."  Lethem's authorial consciousness argues that at least a few artists do know what they're doing—that art isn't always smoke, mirrors and magic.  Lethem's collection—criticism, nonfiction and memoir—is an extension of this position, and in itself an exemplification of the role of creativity and creative consumption in our contemporary catastrophe. ...