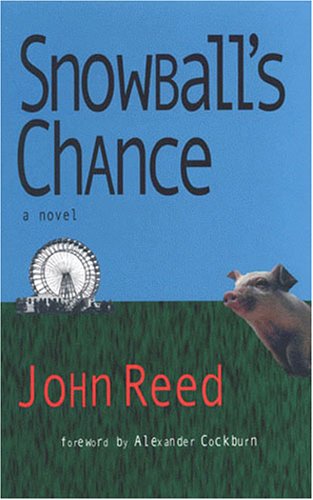 Snowball's Chance is a wildly scathing, landmark novel by New York author John Reed. Written in lower Manhattan, near Ground Zero, in the three weeks following September 11, Reed's story is surprisingly populated, not by Americans and Islamists, but by a motley array of farm and woodland animals who act out American history and its fallout. Reed's novel addresses the events of last year concisely and precisely to target the follies of today's entrepreneurs and religionists alike.

George Orwell's Animal Farm told a wry and sardonic fable of communism in a dystopic collective farm. Snowball's Chance parodies Orwell by firing a broadside at the casino economy and the culture of the good life. In a brilliantly conceived and executed riposte to the marketplace's unthinking cheerleaders, Reed's Snowball, the Pig ousted from the Animal Farm for rationality, returns to bring marketeering to the farm.

At first Snowball's regime prospers: heated stalls, running water, and a window for each animal. The farm moves away from its agricultural roots as Snowball and his team of educated Goats recreate Animal Farm as Animal Fair, replete with citizen performers and criminal sideshows.

With clarity, style, and humor, Reed takes on the legacy of Orwell's famous novel and the boardrooms of the transnational corporations. In doing so he spins a book that is witty, readable, and better targeted than a "precision" bomb. Continuing a tradition which extends from Aesop to Art Spiegelman, Snowball's Chance uses a playful fiction to ask very serious and often dangerous questions.

More than a parody of Orwell’s work, Snowball’s Chance is a cutting satire of American capitalism, exceptionalism, foreign policy, and interventionism. Playing by Orwell’s rules, Reed gives us our own farm fable, and ... classic work. —Jordan A. Rothacker, Lithub

Some books double as a matchstick: if struck in the right conditions, they can cause a wildfire. ... In the three weeks following 9/11, John Reed wrote a riposte to the Cold War fairy tale; the brilliance of Snowball’s Chance being that it expands upon Orwell’s parable to include terrorism, making the story a workable paradigm for the current global contexT. —Brett Rawson, The Rumpus

The novel transcends its particular circumstances … Snowball’s gambit is to turn the farm into a giant spectacle of happiness, and his Animal Fair represents more than just a place: it names an entire ethos. —Craig Epplin, Guernica

Written in lucid, wise, funny, fable-prose, this book brings to mind Spiegelman’s Maus—the use of a playful metaphor to reveal truths we might otherwise refuse to see. —Jonathan Ames

In other words: What did the victim do to deserve it? —Cathy Young, Boston Globe

A pig returns to the farm, thumbing his snout at Orwell ... the world had a new evil to deal with, and it was not communism. —Dinitia Smith, New York Times

It will take a great deal more than a fortnight's work by a smart-aleck anti-corporatist to undermine the most brilliant satire of the 20th century. —London Telegraph

Reed has managed to take a dated masterpiece ... and revive it for the odd, casino-like social and political world we're mired in today; in the process he's created his own masterpiece. —John Grooms, Creative Loafing, Charlotte

Reed's tale, crafted amid ground zero's dust, is chilling in its clarity and inspired in its skewering of Orwell's stilted style. Whether you liked or loathed the original, there's no denying Reed has captured the state of the farm today. —Jay Macdonald, Fort Myers News-Press

This book has something to upset almost everyone who reads it, just like a good book should. —Dennis Loy Johnson

The New York author has ignited a fierce literary debate; is it ever right to write a book modeled on a classic, that twists the original message into unrecognizable form? —David Robinson, Jacqui Goddard, Scotsman

[Reed] not only shanghais Orwell’s story, but amps up and mocks the writer’s famously flat, didactic style–that fairytailish simplicity that has ensured Animal Farm a place in high school English classes for the last 50 years. —John Strausbaugh, New York Press

Fearless, provocative, and both reverent and irreverent at the same time. —Robert Lopez, WordRiot

John Reed ... is getting what he never knew he wanted, hate from right wing groups! —Daniel Robert Epstein, SuicideGirls