—5/23/16, 7:30pm, Gershwin Live: A selection from All The World’s A Grave, A New Tragedy by William Shakespeare, by John Reed @ Dixon Place by John Reed (Penguin/Plume), read by Michael Wiener and Mieko Gavia. Curated by Neke Carson. 161A Chrystie street, Manhattan.

—10/17/08, All The World's A Grave @ the National Arts Club: with John Reed and Ben Greenman, hosted by Fran Gordon. 15 Gramercy Park South, Manhattan.

—09/14/08, 1:00pm, All The World’s A Grave: Brooklyn Books Festival: with Actors from Troupe will perform excerpts from John Reeds’ new book by Shakespeare. 209 Joralemon Street, Manhattan.

All The World's A Grave 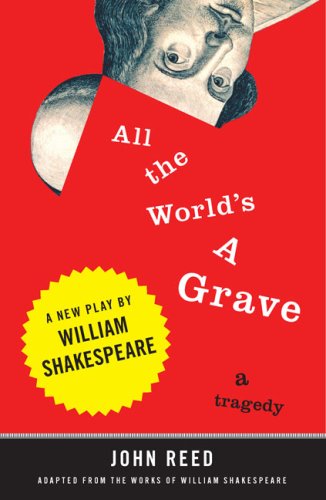 Inquiries as to reprint should be directed to Penguin/Plume.

Theatrical rights have been reserved by the author. Performance rights are granted free of charge, by permission, to non-professional, not-for-profit, educational, and low-budget theater. Inquiries about performance permission or other matters should be directed to:

Macbeth & Witches—Act 4, Scene VI, or in the Brooklyn Rail

The endnotes are organized by act and line number, as keyed to the Penguin/Plume edition.  They reference the provenance of each line, notable meter, and scene locations.

There are currently four quarto versions, cut for the stage.  Lengths (at 10,000 words per hour):

What it is: the known works of W.S., reconstructed, line by line, into a new tragedy, starring Hamlet, Juliet & Romeo, Iago, Macbeth, The Queen, Three Weird Sisters, Rosencrantz & Guidenstern, and the Ghost of the King.

The story: Hamlet goes to war for Juliet, the daughter of King Lear.  Having captured his bride—by unnecessary bloodshed—Prince Hamlet returns home to find that his mother has murdered his father and married Macbeth.  Hamlet, wounded and reeling, is sought out by the ghost of his murdered further, and commanded to seek revenge.  Iago, opportunistic, further inflames the enraged Prince, persuading him that Juliet is having an affair with Romeo; the Prince goes mad with jealousy.

The issues engendered: War, parody, the question of what is authorship, sex and exploitation, the current Shakespeare fracas, the long history of Shakespeare adaptations, Shakespeare and Hollywood, the Public Domain, the literary canon, the state of contemporary letters in relation to “great” works, the creative future we bequeath our children.

I had just decided to name my new play “A Year Without Shakespeare,” to express my weariness with the recurring unimaginative return again and again to the Bard. Then I came upon John Reed’s NEW/old play, and I feel fired up! What a dramatic re-imagination is herein offered us! —Richard Foreman

The literary trick of the year! —Page 6, New York Post

I can’t quite believe “All The World’s A Grave”: such an original idea. —Ian McKellen

It’s a shrewd, gutsy remix that brings the conscience of Shakespeare to our troubled times. —Spalding Gray

In All The World’s A Grave, Reed is a director, an orchestrator, and an assembler taking what was present to work with, and making one brand new Reed/Shakespeare partnership play. He says it’s a Shakespeare play, but really it’s a Reed. How could it not be? Reed does to Shakespeare what Shakespeare did to himself. However, this is part of his big question, his radical literary populism, asking where is the author now, where lies the genius ? ... It is at once an act of homage and conquest. —Jordan A. Rothacker, The Believer

An inspired bit of bricolage ... This “remix version” of Shakespeare proves fascinating and entertaining. Reed clearly loves the Bard. His pastiche contains many of Shakespeare’s best passages, which are always a delight to reread. More impressive, though, Reed fashions from this familiar material a story containing enough surprises to delight even those well versed in the Bard. —Jack Helbig, Booklist

What's destabilizing—and often wildly comical—is not just the rude mash-up of characters and settings violently plucked from their canonical sources but the way in which the power of Shakespeare's language flickers uneasily, surging and hissing and fizzing out only to revive and fade again as the words play against their new contexts. —Christianity Today, Favorite Books of 2008

We haven’t experienced this much haughtiness since college! —Timeout New York

An absolute feast of Shakespeare remixed, reborn, and given a freshness I didn't expect--and it's somehow seamless in the re-appropriation for this new narrative. —Sustainable Arts Foundation

Reed caramelizes the Bard’s plays into a great and terrifying world ... a dizzying feat of writing and scholarship, and uncannily contemporary in its brew of constant trouble. —Lynne Tillman

This is the Frankenstein's monster of Shakespearean tragedy. It raises the Artistotelian emotions of pity and fear to a new level as the audience agonizes over the uncertainty of which catharsis John Reed's play is heading toward. —William S. Niederkorn

All the World’s a Grave alerted the world to a timbre of postmodern genius never before seen in American letters. —Rami Shamir, Evergreen Review

This send-up of the bard is both new yet familiar; by using a literary form of montage, Reed plays with our understanding of some of the best known characters from Shakespeare's oeuvre and creates a work that is eerie in its timeliness. —Finn Harvor, Rain Taxi

The language is Shakespeare's, but the drama that unfolds is as fresh as the blood on the stage. —Fictionwise

The resulting story is both familiar and fresh, and the characters are energized and enlightened. Reed’s juxtaposition allows him to give added depth and dimension to characters. ..  Shakespeare fans can expect classics, like Hamlet’s “to be or not to be” soliloquy or Lady Macbeth’s “Out, damned spot! Out, I say!” lament. But Shakespeare fans will have particular fun catching all the familiar Shakespeare lines that come in surprising contexts. It’s not Juliet, for instance, who cries “O Romeo, Romeo! Wherefore art thou, oh Romeo?” —Scholarsandrogues

With all the cleverness of Touchstone and the mischievousness of Puck, Reed has boldly reimagined the Bard by cutting, pasting, puzzling, and rearranging Shakespeare's own words and characters into an entirely new play. ... Reed has tapped into that muse and produced a re-envisioned Shakespeare that proves to be both provocative, substantial, and entertaining. —hipsterbookclub