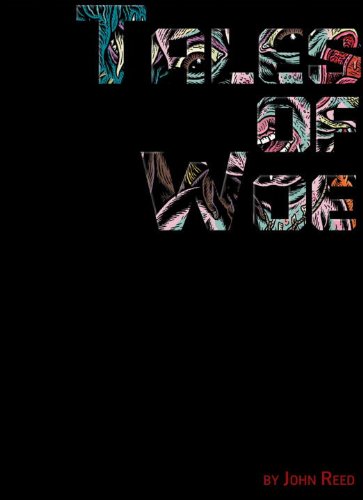 Sin, suffering, redemption.  That’s the movie, that’s the front page news, that’s the story of popular culture—of American culture.  A ray of hope.  A comeuppance.  An all-for-the-best.  Makes it easier to deal with the world’s suffering—to know that there’s a reason behind it, that it’ll always work out in the end, that people get what they deserve.

Tales of Woe compiles today’s most awful narratives of human wretchedness.  This is not Hollywood catharsis (someone overcomes something and the viewer is uplifted), this is Greek Catharsis: you watch people suffer horribly, and then feel better about your own life.  Tales of Woe tells stories of murder, accident, depravity, cruelty, and senseless unhappiness: and all true.

The Grotesque is alive and well ... a dash of Rod Sterling with a touch of Alfred E. Neuman. —Jesse Tangen-Mill, Rain Taxi

Tales of Woe is a macabre compilation of 25 true stories of misfortune, pain and suffering presented in their naked, stark reality without resolution or justice. ...  Tales of Woe violently strips the silver lining off of tragedy and presents it as it is most often experienced—without hope. —Sean Patrick Kelly, New York Press

Novelist John Reed set out to write a book about abject misery and he has succeeded. This month MTV Press is publishing Tales of Woe, a title so appropriate to the unrelenting suffering the book details that there’s little to tell you beyond that. ...  Powerful, disturbing and unforgettably painful. —Calvin Reid, Publisher’s Weekly

An imaginative, eloquent and even funny way of expressing outrage about human behavior  ... truly an accomplishment. —David Winner, The American

Tales of Woe is epic. —The Faster Times

Stories are so dark that they cast no light. Don’t expect happy endings here. —Lauren Betesh, West Side Spirit

Tales of Woe, a book that will undoubtedly come to define our generational zeitgeist, in it's overturning of the thrall of commercialist catharsis. ...  after Friends and The X-Files, Boston Legal, House and The Corrections, reading Tales of Woe feels like a beginning, like the fertile soil of a generational nightmare has at last been properly tilled and readied for something to grow. —Shathley Q, Popmatters

These stories are especially horrifying since all of them are true. No happy endings, no redemption, just bad things happening to good people for no reason. Reed, like the ancient Greeks, brings catharsis to the reader through observation of others' suffering so that we may feel better about our own lives (and relatively trivial burdens). —David Gutowski, Largeheartedboy

So twisted and perverse, and so TRUE that even the editor of a horror blog walks away feeling a little sickened. ... Tales of Woe is nearly two hundred pages of strange and twisted tragedy without even the slightest inclination to serve up a single happy ending. It’s a sickening look at the horrors of real life from around the globe, and while I’m hesitant to recommend it, I have a feeling I pretty much just have. —Marc Patterson, Brutal as Hell

Reed’s dispassionate reportage combines with illustrations that nearly leap off the page, and grabs the reader by the throat, screaming “Unfair? Unfair doesn’t begin to define life!” ... Tales of Woe is not a book to be ignored. It is startling, scary, and relevant. It chills because the reader knows this is the world in which we live. —Miss Bob Etier, Seattle PI

A dark and deeply disturbing examination of injustice and misery the whole world over. That's a pretty fair assessment of the book Tales of Woe by John Reed. ...  The titular tales are clearly and deftly expressed, and its quite a handsome little package: a slightly-larger-than-paperback hardcover with white and red text printed on slick black paperstock, punctuated by occasional illustrations provided by some deeply-disturbed outsider minds. ... I have a feeling that, much like my VHS copy of Henry: Portrait of a Serial Killer, Tales of Woe will have a long and lonely shelf life, leering at me and hungrily licking its lips, just daring me to partake in it again. And, just like with Henry, I will occasionally succumb, only to feel guilty and dirty in its wake. —Jonny Metro, Midnite Media

A universe of sin, suffering, pain, dread, perversion, and depravity. ... If you like romance novels and happy endings, this might not be your cup of tea. If you are into horror, anthologies and want to read something different than the norm, hit your local Barnes & Noble or visit Amazon online. —Geofree Capodanno, Enter the Caveman

The most depressing, unbelievable, gore-soaked, abusive, disturbing and generally unacceptable stories you’ll ever hear, and they’re all TRUE! ... ugly, disturbing and unapologetic. Definite stocking-stuffer material for the nihilist on your list." —Andy Swist, Campblood.org

In Tales of Woe, John Reed assumes the role of a modern day Crypt Creeper and shares tales of shocking horror and absurd tragedy. The stories are nearly as strange as anything E.C. Comics ever published. ... Except, unlike the Crypt Creeper, the stories John Reed tells are all true. —John Struan, Superpunch

The stories are dark, disturbing, disgusting, and horrid...yet I couldn't stop reading! From the first story of a baboon mistaking an infant for a meal, to the story of what albino humans are used for in Tanzania, to the tale of a man having too close of a relationship with animals. ..this book is a great read (if you can handle it). —Rhonny Reaper, Dollar Bin Horror

Tales of Woe is a depressing and harrowing success. ... I must warn you, however.  Tread that road carefully. —The Mike, From Midnight, With Love