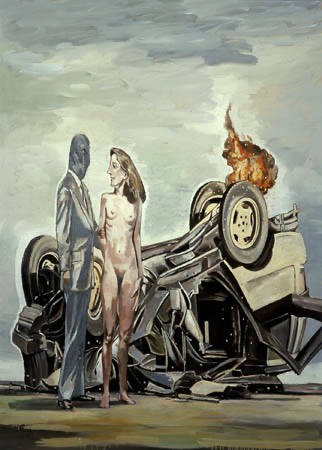 As published in Gay City:

For the last 40 years, pop art, kitsch art and other forms have lambasted society’s material extravagance as so devoid of redemptive character as to be a fascinating study of pure evil. What geniuses, these artists, to bring life to Captain Crunch. (Thank you Will Cotton—I mean it).

On the other hand, political art has taken a long, slovenly turn into the silly, the amateurish and the laughably reductive. All the potential humor and, in political parlance, nuance of the “artiste” is squandered on sophomoric equations of blood on maps and so-and-so is Hitler.

Here we find the challenge facing the left, in creative culture and in political culture—to reconnect with an identity that is essentially witty and seductive (that’s why these are the culture people in the first place), while at the same time letting the warmongering zealots have it.

It is no surprise that Chelsea would find expertise in this delicate matter in Nicky Nodjoumi, who was branded an anti-revolutionary by the Ayatollah Khomeini in the 1980s. In the name of a better Iran, 150 paintings by Nodjoumi were taken from the Museum of Contemporary Art in Iran and destroyed. The works, according to Khomeini’s regime, were anti-Islamic and pro-American.

Nodjoumi’s large oil-on-canvas paintings are the fine art extrapolation of political cartoons—more riveting, more esoteric, more primal, more intricate. In 17 works currently on exhibition at Mike Weiss Gallery, the politicians jog, with their cocks hanging out; the diplomats meet on hillsides, bearing enormous burdens of olive branches and distended hearts. Nodjoumi’s works will give you as much wit as you give them attention, and yet the revelations they offer are not terminal; there is no skulking answer, just an infinitely more appealing view of life. Why of course, a white guy in a suit, running along, clutching a long stick and a small octopus—now that’s a political race.